Today was harder than expected. Partly because I expected it to be dry. It was not. I wouldn’t be surprised if it rained just as much as yesterday, just in shorter and more intense bursts. So there was some running and hiding under trees. And some being grateful that the rain cover of my pack seems to work well.

At one point I could look in one direction and see a clear, sunny day, and turn my head about 90 degrees and see a storm brewing. 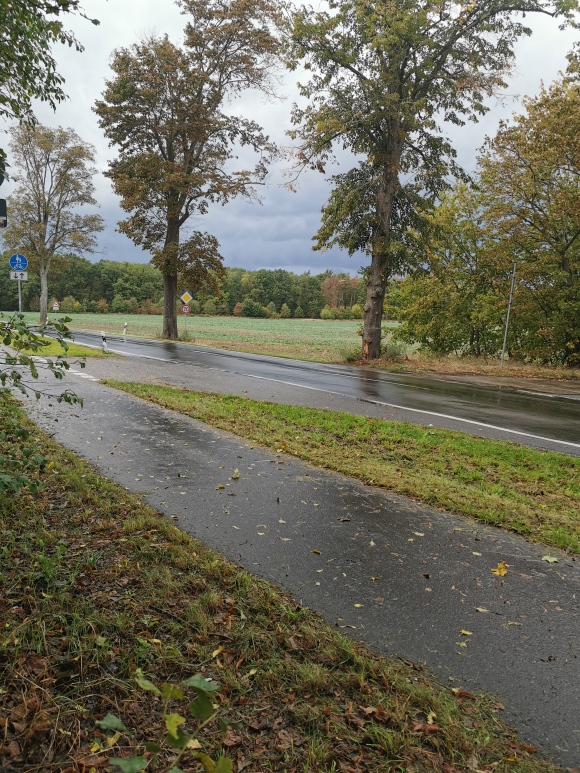 I also ran into a couple of “path does not exist” issues again, one of which lengthened my walk by 1,5 km. After the app had sort of regained my trust by guiding me without fault through several forests, it’s starting to get unreliable again.

I also saw a dead raccoon, and I saw one yesterday too and a beaver the day before that. I have yet to see live versions of either animal, and now that I’m in an urban area again I suspect I probably won’t.

Aaand now that I have finally defeated mister blister in combat (he was a worthy adversary and put up quite a fight), my other foot is starting to hurt all over the place. I suspect walking for two days in wet shoes and socks hasn’t helped the foot situation much.

BUT, I made it through another day, and I only have about 40 very rainy and windy kms to go to Berlin – which I could probably even do in one day if I was keen on really killing my feet before I get there. But I’m not, so though I’m impatient, I’m still thankful it’s split in two. But I’m so close now I can taste it.

And now I think it’s time for me to go see what the Asian food in the restaurant downstairs tastes like, as I feel like it’s calling to me… Laters!

I am a half Irish half Norwegian living in the Netherlands. I'm an HSP. I love books and food and Netflix, nature, working out, travel and the sea. My family (both by blood and choice) is very important to me. I am an energist and a body positivity coach with my own business - Thompson Body Positivity (thobopo.com).

Only 2 more days!! Can you even believe it, because I can’t!!! I am so freaking proud of you and so in awe of your achievement! This is huge! It’s one of those things you’ll tell ppl for the rest of your life, or at least I will!! “Did you know I have a friend who walked a long time…?!” You are awesome!! 🙂

Haha “who walked a long time” 😀 but thanks! No, I cannot really believe it yet.. Wonder if it will sink in when I get there or maybe only after I’m home?